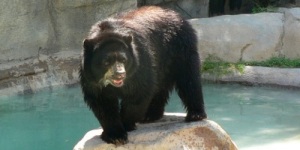 Andean Bear at Reid Park Zoo in Tucson, Arizona. This species is listed as vulnerable by the IUCN.